I recently attended a live event in Grand Rapids with a friend.  It was the fifth annual Barcamp for our area.  I had never heard of Barcamp, but I was intrigued to see what it was all about.  They describe it as an “un-conference” because unlike every other live event that I’d ever been to, there was no schedule of events, no keynote speaker, no agenda of things to be accomplished.  I wasn’t so sure if I would like something that was so unstructured, but I gave it a shot. 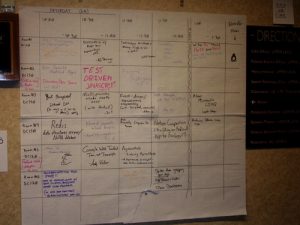 Okay, now when I say “unstructured,” this is what I’m talking about…at the left, you will see a sample of our schedule.  It was a blank grid when we all arrived.  Basically, if you want to talk to a room full of people for 30 minutes, you sign up for a block of time.  Most of the talks had to do with programming or designing, but not all of them.  I actually attended one block to learn about “Tichu: The most addicting card game ever!”  It was really fun!

While I’m not a programmer, I can appreciate the work that programmers do.  I consider myself a designer and/or developer.  I take the structure that exists (WordPress, in most cases) and create a look and feel that brings out the personality of a business owner or a business that will be appealing and user-friendly to that particular target audience.  There were a few people at Barcamp who did something similar to what I do, but most were even geekier than me (that’s NOT an insult, by the way). 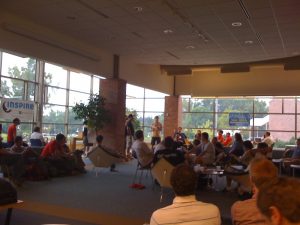 I made some good connections at Barcamp and met several people who I plan to follow up with in the near future.  Live events are a very valuable experience in every line of work.  I believe that there is something that we can learn from everyone–even if it’s how not to do something or that you respond better to people who aren’t overly arrogant.  See where I’m going?  I just try to keep my mind open and look for something positive in whatever situation I happen to be in at the moment.  I enjoyed BarcampGR and will most likely go again next year.  I may even get up and talk next year…could be fun!